Jump In: Share Your Story Even If You’re Afraid with Kim Lengling

Jump In: Share Your Story Even If You’re Afraid with Kim Lengling

We all have a story to tell. Whether they’re tales of triumph in the face of adversity or heartwarming accounts of everyday life, our stories have the power to entertain, inspire, and even educate. When you have your story published, it can reach a wide audience and make a real difference in people’s lives. Your story is more than just words on a page — it’s the unique voice that only you can provide. Yet many people don’t share their story because they’re afraid to take a risk and put themselves out there for everyone to see.

This week’s Publishing Secrets guest, Kim Lengling, reminds us that it’s okay to be afraid to share your story with the world. But she also encourages you to do it anyway, because there’s someone out there who needs to hear your story. You never know how your words will impact someone else’s life, so let Kim inspire you to jump in and get that story published!

Jumping Into Something New

God has used Kim’s voice in many different ways from book collaboration projects to her own TV show. But Kim says she never envisioned her life would turn out this way. Growing up in a small town, Kim thought she would end up working an office job like so many of the women around her did. And for a while, that’s exactly what happened. After serving in the military right out of high school, Kim returned home and worked her way up through various office positions.

Fast-forward to 2020 when the Covid-19 pandemic hit: Kim’s office job was terminated, and she had no idea what to do next. “I gave myself 24 hours to be angry,” she recalls. “And 24 hours later, I woke up and said, ‘Alright, Kim, pull up your big-girl panties. What do you like to do? What are you good at? What are you passionate about?’”

Kim turned to her volunteer activities for inspiration, and realized she was passionate about writing — and especially about sharing her own story and the stories of other people. That was when she both felt and heard God telling her to start the collaborative book When Grace Found Me. At first, she thought it was a crazy idea, but within just a few weeks, she had so many people who wanted to participate that the book grew into a series of three books.

And that was just the beginning. With each new nudge from God, Kim found herself jumping into new projects like starting up a podcast and later a TV show.

Around that same time, Kim’s life group at church was studying a book titled If You Want to Walk on Water, You’ve Got to Get Out of the Boat. Kim says that title has stuck with her ever since, encouraging her to jump right in whenever God calls her to try something new — even if she feels afraid or unsure. “Sometimes God asks you to jump,” she says. “And so I did. I jumped.”

Kim hasn’t always had this close relationship with God. She wasn’t raised in the church, and never read the Bible until she was in her mid-30s. When she went through a life-altering, traumatic experience in the military, Kim says she simply locked it away for 15 years.

“I’m a professional wall builder,” she says of her tendency to keep such trauma hidden deep inside. “If there’s cracks or crevices, I get the mortar out and shore that wall up again, because none of that darkness is seeping out. But the darned thing about walls is nothing gets out, but nothing can get in. And life does continue to happen.”

One day when she was 33, Kim found herself sobbing on the floor because of all the hardships and losses that had piled up in her life. Though she didn’t realize until later, she was crying out to a God she’d told herself she didn’t believe in and asking Him for help.

In that lowest moment, when she finally admitted to herself that she couldn’t continue to move forward like this, Kim felt a whisper from God saying, “Those who hope in the Lord will soar on wings like eagles.” Kim didn’t understand where those words came from, but she thought they sounded “Bible-ish,” so she frantically searched her home for the Bible she remembered someone had given to her.

But now Kim had a new problem: there was no index, and she had no idea which page to turn to. “I got angry,” she recalls. “And so I threw it away from me. I threw the Bible on the floor, and it slid away.” At that moment, she heard the whisper again. When she picked the Bible back up, those same words seemed to jump right off the page: “Those who hope in the Lord will soar on wings like eagles.”

God Will Find a Way

Kim says that was the turning point. While she still considers herself a work in progress, she’s come a long way in her walk with God. Whereas before she used to think people who participated enthusiastically in worship were crazy or just putting on a show, now she’s become one of those people.

“When I think of that day and that moment, I still get goosebumps,” she says. “It still brings me to tears. And I think the tears are thankful tears, because now I know who I am. And I know Whose I am. And I don’t feel lost anymore.”

Maybe you have people like Kim in your life — people you’ve been praying for, hoping they’ll come to the knowledge of Christ. Sometimes, you may start to wonder if that will ever happen. You don’t see any evidence of progress, so you feel like nothing is happening. If so, let Kim’s story encourage you: God is very intentional at drawing people to Him in ways that are unpredictable — and that are custom-fit to each person.

God knows us incredibly well. He is able to find just the right thing to attract our attention and draw us to Him like an incredibly strong magnet. So if that’s your story — if you’re praying for someone and believing for them to come to Christ, don’t give up! Continue to pray. You may not be able to see everything that’s happening, but God is still working, because He loves them, too.

Step Out of Your Comfort Zone & Tell Your Story

One of Kim’s recent experiences “jumping in” to something new was her participation in our first ever Speak Up global speaking competition. In fact, Kim was one of the very first people to decide to take part in the competition, which involved both writing and speaking, and she was one of the seven finalists whose stories will be featured in an upcoming book project.

While many writers feel nervous or even afraid of venturing into public speaking or podcasting, Kim loves speaking. Still, she says she felt unusually nervous on the day of the Speak Up competition final live session. As she tried to calm her nerves, a thought came into her head: “This is your story. Now share it.”

Stepping out of your comfort zone can be scary, but sometimes it’s necessary. “You have a story in your heart,” Kim reminds us. “You know your heart, and God knows your heart. And if you feel that nudge, don’t ignore it.” Even if you feel nervous to share your story in a different way, follow God’s leading and share it anyway.

After all, as Kim points out, it’s possible someone needs to hear you speak your story out loud — and it’s possible that person is you.

Think about all the stories you’ve read or heard that moved you to tears or helped you reach a breakthrough. “If those people hadn’t written that story,” Kim says, “if they hadn’t woven those words together in just that way, if they hadn’t shared their story on a podcast and reached you, you never would have felt that and had a breakthrough. So if they can do it, why can’t you?”

Our enemy likes to convince us that our stories have no value, that no one will want to read or hear them, or that it’s too hard and scary to share them with the world. But if God has called you to do something, He will provide a way for you to do it — all you have to do is listen to His guidance and follow where He leads.

According to Kim, this may require a change in perspective: “You have to start looking at it in a different way of not your fear, but it’s God’s confidence in you. Because He chose you.”

Don’t let yourself be fooled into thinking your story is some small, insignificant thing. God has a plan for it, and you have no idea how many people could be impacted by your decision to share your story. God has all the pieces set up, but they won’t fall into place until you say yes to your calling.

Kim describes it as spokes on a wheel. “I’m just one of however many spokes are in this big old wheel,” she explains. “But it’s all needed. All those spokes are needed so the wheel can roll the way it needs to roll.”

God knows what He’s doing, even though we don’t. And the longer you try to resist your calling, the more He’s going to keep bringing it to your attention. So why waste time resisting when you could be stepping into something greater than you can imagine?

Remember Whose You Are

It’s one thing to talk about the joy of jumping in when God calls you to do something — like sharing your story in a different way than you’re used to — but it’s another to actually jump in and do it. Many of us tend to overanalyze and plan and worry, and procrastinate on starting what we know God wants us to do.

If that’s you, Kim advises you to open your heart and really listen to God’s prompting. No matter how nervous or afraid you feel, remember that God chose you for this task — and He chose you for a reason. Only you can tell your story.

“Remind yourself: ‘I know who I am and Whose I am,’” Kim says in closing. “‘And He chose me to do this whether I think I can or not. And I’m going to give it my best shot, and He’ll be with me the whole way.’ So jump. Do it. You can’t walk on water unless you get out of the boat, folks.” 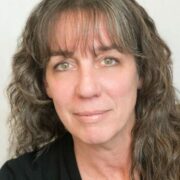 Sharing her faith, nature, love of rescue animals, and as a veteran living with PTSD, Kim Lengling has been writing since 2004. She has been featured as a co-author in seven anthologies, is the lead author and coordinator of a collaborative 3-book faith-based series titled When Grace Found Me, the host of the podcast Let Fear Bounce, host of The Write Stuff, The Author’s Voice TV Show with the Believe In Your Dreams TV Network and a co-host of a weekly radio show, Voices4Vets. Visit Kim’s website here. Follow her on Facebook, Instagram, and Twitter.