Go for It: Starting a Podcast & Having Difficult Conversations with Jacque and Megan

Go for It: Starting a Podcast & Having Difficult Conversations with Jacque and Megan

Have you considered starting a podcast to help get your God-given message out into the world, but aren’t sure where or how to begin? Do you want to tackle difficult but important topics, but worry about the response you might receive?

Either way, this week’s Publishing Secrets episode is for you. This interview, taken from the Christian Authors Network Community Meet Up in May 2022, features Jacque and Megan of the Let’s Talk About It podcast, sharing their experience of starting a podcast and finding common ground despite differing beliefs. Don’t miss their valuable insight and advice!

In a culture that is increasingly hostile towards Christianity, it can be easy to feel like our voices are being drowned out. But we have power. We have God on our side, and we have the power of technology that can be used for good. Using technology, we can make our voices heard like never before, and starting a podcast is one of the most effective ways to do that. We can choose to start a God-honoring podcast that tackles tough issues and make a powerful impact for Christ in today’s world.

And that’s exactly what Jacque and Megan have been able to do as the creators and hosts of the Let’s Talk About It podcast. The goal for the podcast is to have a space to talk freely about topics that are messy, awkward, hard, or controversial, and to create a space for healing. What’s interesting, though, is that Jacque is a devout Catholic and Megan is Protestant. They love having the opportunity to talk about differing views while still caring for and respecting each other.

This quote from their website says it all: “In a culture of social media outrage, division, and canceling, we want to create an environment in which we can have fruitful discussion and disagreement. We welcome you to join us in this endeavor.”

It was so exciting to have Jacque and Megan join us in the Christian Authors Network community for our May Meet Up, and I want you to be able to benefit from that conversation as well. You’re going to learn so much in this interview: how they started their podcast, how the podcast concept began to grow as they leaned into what God was telling them, how they are able to get along even though they have different religious backgrounds, and how they were able to get people interested in their podcast.

If you’re thinking about starting a podcast, or if God is nudging you to step out, this interview will give you the ideas and the insights that you need to move forward.

Jacque and Megan like to say that they took parallel paths – the “Catholic Version” and the “Protestant Version” – into ministry.

For Jacque, the journey began while earning her undergraduate degree at Franciscan University of Steubenville. After God called her to work with nonprofits, she moved to Chicago and began working with various nonprofits and ministries, including her own church’s women’s ministry.

Likewise, Megan also moved to Chicago to fulfill a call to ministry. She earned a degree in Ministry to Women from Moody Bible Institute, and later took on a leadership role in her own church’s women’s ministry.

Along the way, they both wound up working at a crisis pregnancy care center, which was where they first met.

Jacque says the idea of starting a podcast originated as a joke. But then God impressed the idea on her heart, and as they both prayed about it, doors started opening up. Megan’s husband already had the equipment they would need, and they had little difficulty choosing topics for their episodes.

“We had a very similar openness to talk about these topics that a lot of people don’t like to talk about,” Jacque explains. “And we both had gotten feedback in our own lives that we were really good at sharing about these things, whether it was in conversations or separately on our social media, in a way that was both productive and appropriate.”

Their story is a great lesson for all of us. When we feel God leading us to something, we should first be open to it; second, take it to God in prayer; and third, trust that He will provide whatever we need to fulfill the call that He has given us.

Jacque and Megan’s ability to openly and respectfully discuss controversial topics on thier podcast stems directly from their friendship. “Even before starting a podcast, we were very open with each other,” Megan recalls. “We very naturally just kind of fell into the sort of difficult topics about healing and faith and messy stuff people don’t like to talk about.”

It’s not always easy to address differences of opinion – let alone faith! – and disagree in a healthy manner. But Megan and Jacque are committed to following the example of Jesus and keeping their conversations respectful and edifying.

“We want to demonstrate that we can have godly disagreement,” Megan says, “and we can foster this countercultural sort of response and environment that’s sort of foreign. Because I feel like nowadays, we either shy away when we have differences, or we are really aggressive. And we’re wanting to show that there’s a different way.”

That’s not to say they weren’t nervous about sharing these conversations publicly, however. With one host Catholic and one Protestant, both ladies admit to being nervous about how the “other” audience would respond to their views.

But being willing to vulnerably share their own experiences and beliefs has allowed them to help listeners who previously felt they had no safe people to talk to, or who were relieved to know they weren’t alone in their struggles.

Even among Christians, there are so many divisions and disagreements these days that it can be hard to come together and put our differences aside. And that’s exactly what Jacque and Megan hope to help people overcome through their podcast – to create understanding, compassion, and healing.

Even before starting a podcast, Megan and Jacque realized from their own private conversations that they had some mistaken impressions of each other’s beliefs. Now, instead of trying to change each other’s viewpoints, they’re able to understand and respect each other’s positions – to disagree and still be unified in friendship.

“It’s really that compassion that comes with being willing to talk to someone and listen to them, and actually hear it from them instead of creating this idea of who they are and what they believe,” Megan explains. “I think Scripture is very clear that sin and Satan, they work in the dark. That’s where things fester. And it’s in the light that things are brought forth and changed.”

So often, we’re too focused on getting our own point across, and we forget to listen to the other person. We listen to respond instead of listening to understand. But, as Jacque and Megan have discovered, when the goal is understanding instead of convincing the other person that you are right and they are wrong, you’re able to focus on what you have in common rather than being divided by your differences.

Once Jacque and Megan had decided on the concept for their podcast, they had to overcome a very common hurdle: perfectionism. Both ladies admit to be recovering perfectionists, and say that the hardest part of starting a podcast was not comparing themselves to other, more experienced podcasters.

“You’re not going to be perfect, but doing something is better than nothing,” Jacque says. “Because even looking back at those episodes where maybe the sound is not the best or something else is off, they still have really valuable content in them. And if we hadn’t started then, we wouldn’t have gotten to where we are now.”

To help relieve some of the pressure, Jacque and Megan decided to record the entire first season ahead of time, and released the episodes afterward. Not only did that give them time to get more comfortable with the podcast process before letting people listen to their content, but it also helped them establish a consistent release schedule from the very beginning.

While there were times when they were tempted to throw out episodes with technical issues or bad audio, their trust that God would use the content won out. “We just had to be like, Okay, Lord, we feel like You want this word out there,” Megan explains. “And we had to just let go and feel a little humble that it’s not perfect. And it’s not anywhere near where we want it.”

To their surprise, some of the episodes with the worst audio quality actually wound up getting the most listens, proving that people needed to hear the message – even if its delivery was less than perfect.

And that message of taking action even if it’s not perfect carried over into the marketing side of starting a podcast, too. While they’ve seen growth over time, building up their audience was slow at first. But with patience, consistent posting, collaborating with guests, and sending a direct link each week to their email list, their audience continues to grow.

If you also feel called to spread your God-given message by starting a podcast, Jacque and Megan advise you to just get started instead of trying to get everything figured out and perfected ahead of time.

“It’s not going to be perfect,” Jacque reminds us. “You will learn along the way. But if you feel a calling on your heart from God to do something, just start. Just do it. And if it’s meant to continue, it will, because God provides the resources.”

Megan adds that it’s important to take action, even if you feel like what God is prompting you to do is impossible. “There were people we wanted to ask to come on as guests,” she recalls, “But we were like, ‘Oh, they would never – we are such a little podcast.’ And then we’d reach out … and they would love to come on.”

When you obey God’s prompting, step out on faith, and do your best to be consistent, you might just be surprised by how much you can achieve. 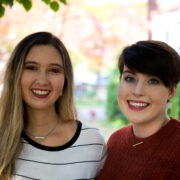 Our heart for this podcast is to talk freely about topics that are messy, “awkward,” hard, or controversial, and create a space for healing. Early on in our friendship, we both noticed how open and willing we were to talk about things such as mental health, sex, sin struggles, relationships, faith, and more. This podcast is a space for us all to talk about these issues that are normally kept hidden and bring them to the light!

We met at our job, a non-profit organization serving women in crisis pregnancies, and quickly became friends. We are very similar: always ready for some iced coffee from Dunkin Donuts, we both cry easily (oops), and have a sarcastic sense of humor. We’re also very different though, and we aren’t afraid to dive headfirst and explore those differences. The biggest difference: Jacque is a devoted Catholic, and Megan is Protestant. There has long been a schism between Catholics and Protestants and we love that we can talk about our differing views and still care for and respect each other!

In a culture of social media outrage, division, and “cancelling,” we want to create an environment in which we can have fruitful discussion & disagreement. We welcome you to join us in this endeavor!