Expect the Impossible: Speak Up Round 2 Finalist Lystra Wilson

Expect the Impossible: Speak Up Round 2 Finalist Lystra Wilson

As the old saying goes, everyone has at least one book in them. However, not everyone actually sits down and writes that book. Why not? Often, people don’t follow through on their writing goals because of fear. Fear of failure, fear of success, fear of the blank page — all of these can be incredibly paralyzing.

But fear is always going to be a part of the writing process. Even successful authors feel fear when they start a new project. The key is to push through that fear and allow yourself to create something great for the glory of God. In this episode of Publishing Secrets, guest host Lystra Wilson shares her own experience with fear: why it took her so long to write her book, what she learned from the experience, and how you can slay the giant that is in front of you.

This episode is part of the Christian Authors Network global speaking competition, Speak Up. Click here to learn more and stay up-to-date on the competition!

Lystra Wilson: Slay That Giant and Expect the Impossible!

Writing a book is a huge task, and it can seem like an impossible dream at times, especially if it’s your first book. After all, we tend to hold that first book like it’s our firstborn child — it’s so hard to let anybody see or touch it, and God forbid they say anything negative about it!! We take criticism of that first book so personally.

So many of us authors are battling this great big giant called Fear. If I could go back in time and ask myself, “Lystra, why is it taking you two years to write and publish your first book?” my response would go a little something like this:

“You know, I don’t know why it’s taking me so long to write this book. I mean, I’m a really good writer, and everyone is so excited for me to finally publish something they’ve been looking forward to. But when you write a book and publish it, those words are permanent. They’re out there on paper for everybody to see, forever! So I guess, if I were being honest, I’d have to say I’m afraid. I’m afraid of what people will say or think about me when they read my words.”

Fear is a thief of hope and expectation. Fear lies to us. But if we are going to expect the impossible, we’re going to have to slay that giant.

What Are You Afraid Of?

You have been telling people for a really long time about that book that you’re writing. So what exactly is it that you’re afraid of?

Regardless of the source, all that fear leads to procrastination.

The Key to Slaying Giant Fears

Consider the story about the Israelite army and a shepherd boy named David. Goliath was an enemy to the reputation of God and who He created Israel to be. And now, that giant fear is causing the same issue for you.

God has created you with a purpose, yet fear — that big giant — is standing in the way of your victory. Fortunately, a solution can be found in 1 Samuel 17:48. This verse says, “As Goliath moved closer to attack, David quickly ran out to meet him.”

Isn’t that amazing? David was just a boy. Very small compared to Goliath, especially. But as Goliath was moving into the battle, David actually ran quickly toward him. Is that something that you could do? Being afraid of something that seems so big, so ominous, and yet somehow you gain the courage to just run after that thing to slay it?

Here’s something pivotal I’ve learned: Perspective is critical to how you perceive things. That giant is standing between you and your purpose and destiny. The world is waiting to experience your greatness. You must leave behind the mindsets, people, and practices that are going to crush your hope and steal your faith. It really does take courage and perseverance to accomplish the impossible and to move past your fear.

So what does it take to expect the impossible? You must have:

Remember Matthew 19:26, where “Jesus looked at [the disciples] intently and said, ‘Humanly speaking, it is impossible. But with God everything is possible.” You already have everything you need to expect and accomplish the impossible. So run toward that fear, and slay that giant! 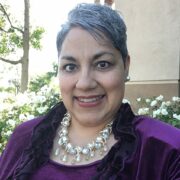 Lystra is the best-selling author of “Get Real: Healing Your Identity and Unlocking Your Purpose” and just released the highly impactful “Five-Fold Females Study Journal.” She accepted Christ at the tender age of four and is passionate about helping others to heal and thrive! She is a country girl at heart who loves horses, butterflies, and transparent conversations. Visit Lystra’s website here. Connect with her on Facebook, Instagram, and Twitter.

The Speak Up Competition, sponsored by the Christian Authors Network, is a powerful source of hope and light for people all over the world. This year’s theme, “Expect the Impossible,” is a reminder that no matter how dark our situations may look, we always have hope because we know that all things are possible with God! The inspirational messages featured in this series are from the round two finalists. Stay tuned for updates as the competition progresses, and please pray with us that God will use this competition to bless and encourage His people. We know that the speak up community has the power to make a difference in this world, and we can’t wait to see what God does through us!